As part of our challenge to raise much needed funds for Darwen Library Theatre we called upon some of the acts who had performed at the theatre to see if they could help in any way.

Chris Difford (mainly known for his career with Glenn Tilbrook as the nucleus and writing team behind Squeeze) got in touch to offer his support for our campaign.  Chris has visited DLT twice in the last few years with two completely different shows. He has also performed with Squeeze at King George’s Hall multiple times and appeared as a special guest with Jools Holland when he last visited too.

The idea was b 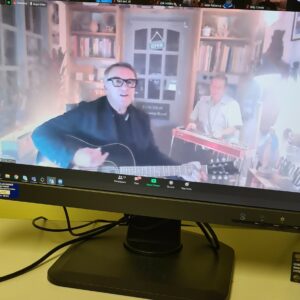 orn that Chris would broadcast a live show from his garden shed and that customers who donated would receive a link.  And on Saturday 17th October it happened! Chris performed the show to approximately 65 people (some of which were sharing sofas but had donated twice). The mix of songs and chat plus a couple of guest performances, most notably Mark Nevin, the songwriter behind fairground Attraction.

After a shaky start (Chris had his mic turned down!) the show was filled with hits such as Take Me I’m Yours, Up the Junction and Cool for Cats stripped back and performed acoustically plus tracks from his new collection “Song Club” and the banter that he is well known for. With an intro and exit from Cliff Richard (on record not in person!) and an overused dry ice machine the show ran for 90 minutes and even included a completely out of time sing a long.

The show raised nearly £700 for Darwen Library Theatre so a massive thanks to Chris for giving his time for free to perform for us and thank you to those that donated. Chris has scheduled a couple more shows for other theatres, more details can be found at https://chrisdifford.com/

You can continue to donate to Darwen Library Theatre using the link: https://uk.patronbase.com/_BWDVenues/Products/Donate Every penny will help us get back to hosting events safely in due course.